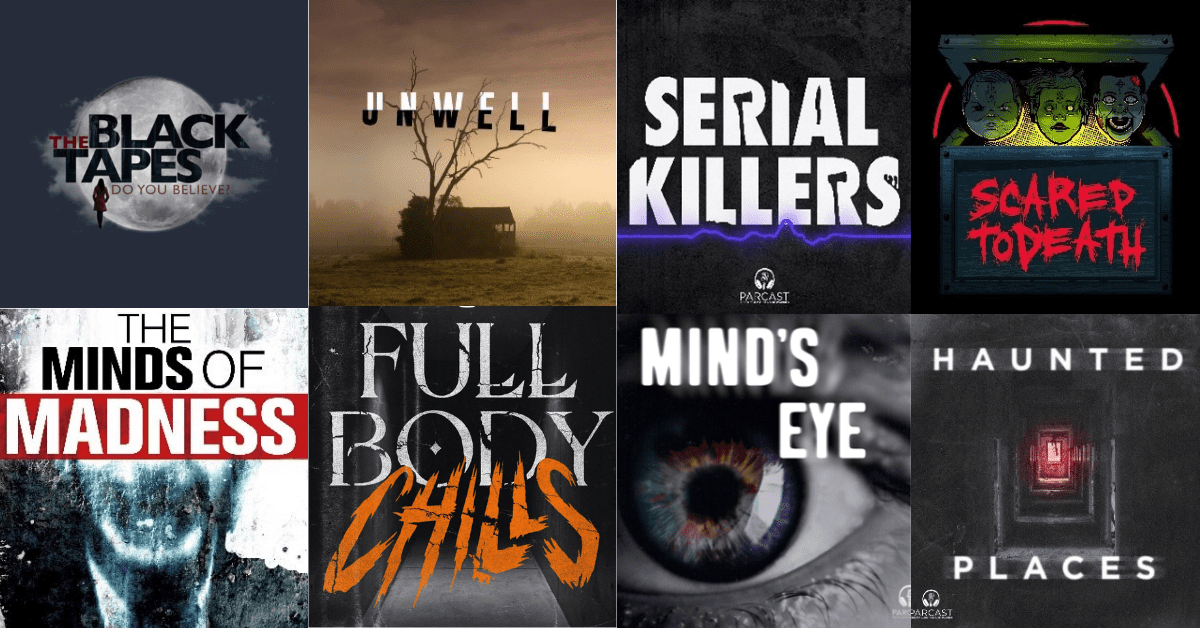 Horror is a genre that lends itself quite nicely to the podcast medium, and I made a list of the best horror podcasts I have found. Good horror is immersive, and great horror lingers for a while after the story ends, manifesting as a presence in the shadows or a chill down your spine.

I am an avid consumer of horror, as I’m sure you reading this are, too. As much as I’ve loved the few horror podcasts I knew of – including Scary Story Podcast (SSP) and A Dark Memory (ADM) – I wanted to dive deeper into the world of audio horror. This recommendation list is my journey into that world.

For those of you who consider yourselves to be horror podcast aficionados, I hope this list contains at least one show you haven’t come across yet. (If not, feel free to drop your own recommendations in the comments!) For those of you who, like me, are newer to the audio horror genre, I invite you to come along on this journey with me. Without further ado, in no particular order, here are 13 of the best horror podcasts I’ve discovered:

*Disclaimer: Most of these recommendations are at least PG-13 – typical for horror, but listen with caution!

Archive 81 is a “found footage horror podcast.” Dan Powell, a new employee of the Housing Historical Committee of New York State, is tasked with organizing the many tapes from the titular archive. Tape after bizarre tape reveals sinister, supernatural forces contained within the mysterious Visser building, whose inhabitants have mesmerizing and chilling stories to share with interviewer Melody Pendras. The podcast has three seasons and 32 episodes, 15-45 minutes each. Although Season 3 ended in 2018, a Netflix adaptation is currently in production.

One of Parcast Network’s many podcasts (heads up: a few Parcast shows made this list), Haunted Places is the perfect mix of history and fiction. Every episode features one of the “scariest, eeriest, most haunted, real places on Earth,” as host Greg Polcyn recites. Because the locations often have violent histories, Polcyn warns children under 13 to listen with caution. There are 200+ episodes, each around 45 minutes long. Haunted Places airs every Thursday; Urban Legends, a Haunted Places spinoff, airs on Tuesdays. Haunted Places is available on both Apple Podcast and Spotify, while Urban Legends is only on Spotify.

Welcome to “Alternative Appalachia,” the fictional world in which these stories take place. Writer/Narrator Steve Shell has a deep voice and a Southern accent, which, when combined, immediately immerse you in the spooky environment. The stories are folkloric, like ones you would tell around a campfire, deep in the woods. Old Gods of Appalachia has 30 episodes, which are standalone stories that range from 10-45 minutes. New episodes air twice monthly.

Unwell is another narrative fiction podcast in the middle of its third season. A self-described “Midwestern Gothic Mystery,” the show follows Lilian Harper to small-town Mt. Absalom, Ohio, whose inhabitants seem just a little too friendly. The audio – both the voice acting and the background noises – is incredibly immersive, making it easy to picture the action in your head. While three seasons may sound like a big undertaking, the seasons are only 12 episodes each, at around 30 minutes an episode. That should give you plenty of time to listen before Season 4 premieres next spring!

Another Parcast podcast, Serial Killers is hosted by Greg Polcyn and Vanessa Richardson. Every Monday and Thursday, the duo presents the details of a famous serial killer’s life. This podcast, spending a good chunk of time on the killers’ psychological backgrounds. (Neither host is “a licensed psychologist or psychiatrist,” but they do “a lot of research for this show.” (This repeated disclaimer has become a running gag, even inspiring merch!) Serial Killers has nearly 300 episodes, many of which are two-parters; they run between 30 and 60 minutes.

The Black Tapes follows Alex Reagan, a journalist investigating the paranormal. The storytelling is reminiscent of the podcast Serial. While that style makes for a convincing story, don’t be fooled – a quick Google search of the show will reveal that the podcast is a fictional “docu-drama” Regardless, the mystery is compelling. The Black Tapes is in its third season (same story, unlike Serial), seemingly on hiatus. The previous two seasons were 12 episodes each; the latest episode – Season 3’s mid-season finale – aired in January 2020. Episodes are 30-45 minutes.

RABBITS is another podcast that toes the line between reality and fiction. This podcast centers around a mysterious, dark-web game; the disappearance of one of the players; and her friend, Carly Parker’s, search for answers. This podcast is in its second season, and the episodes are around an hour each. You can also listen to a three-part bonus story called THE PATH.

If you’re looking for a similar podcast to SSP, Full Body Chills is a great choice. Narrator Ashley Flowers has a captivating voice that compliments the well-written stories. All episodes are less than 30 minutes long. The podcast has three seasons and 50+ episodes.

This is the last Parcast show on the list. Unlike the other two, though, Mind’s Eye is narrative fiction. In just six, half-hour episodes, Mind’s Eye unravels the mystery of Kate McClay’s night terrors. If you’re looking for a short thriller series, this podcast is perfect. (Don’t hold your breath waiting for a Season 2!)” Mind’s Eye is only on Spotify.

Join Dr. John Kinsler and his assistant Katie Reed, employees of the Roth-Lodbow Center for Advanced Research, tasked with the innovative Project Cyclops, which allows them to observe final memories of the deceased. The pair quickly realize that their patients’ deaths are linked to the Center and that they may have been unwittingly pulled into a gruesome conspiracy. Darkest Night has 3 seasons, 10 episodes each. Most episodes are around 30 minutes long.

(An extra warning: each of the episodes features memories of a murder, and the audio reflects any gore from those murders. If gore is your least favorite horror trope, I still recommend, but be prepared for some gross sounds.)

Scared to Death marries radio show-style banter perfectly with the creepy storytelling of SSP. The narrator, Dan Cummins, hosts with his wife, Lynze, whose sporadic interjections are the audio equivalents of jump scares. This podcast is the only non-narrative one on the list with a touch of humor. I included it anyway because of the high-quality horror it provides. Each episode features two stories (another similarity to SSP), and they’re 60-90 minutes long. Episodes air every Wednesday.

12. The Minds of Madness

True crime doesn’t necessarily equal traditional horror, but this true crime podcast leans into the creep factor. Host Tyler blends narration with real recordings pertaining to the cases. The additional audio grounds the listener in the reality of what they’re hearing; in my opinion, reality is always scarier than fiction. Fans of ADM would likely enjoy that aspect of The Minds of Madness. This show has 100+ episodes worth of terrifying true-crime tales, each 30-60 minutes.

Narrator Abbey Sobota presents creatures from American myths in less-than half-hour episodes. Abbey provides descriptions of these creatures, personal stories, and tips for protecting yourself, if you believe in the myths. Fifteen episodes have aired so far, and it’s unclear if/when more episodes will come out, so if you are looking for a shorter time commitment, this podcast is for you! You can also check out Sobota’s Tik Tok account (available in the episode descriptions on Spotify) for more content.

Creepy Diaries Part Four: All by Myself

The Tragedy of the Burari Deaths