Beware of the Krampus 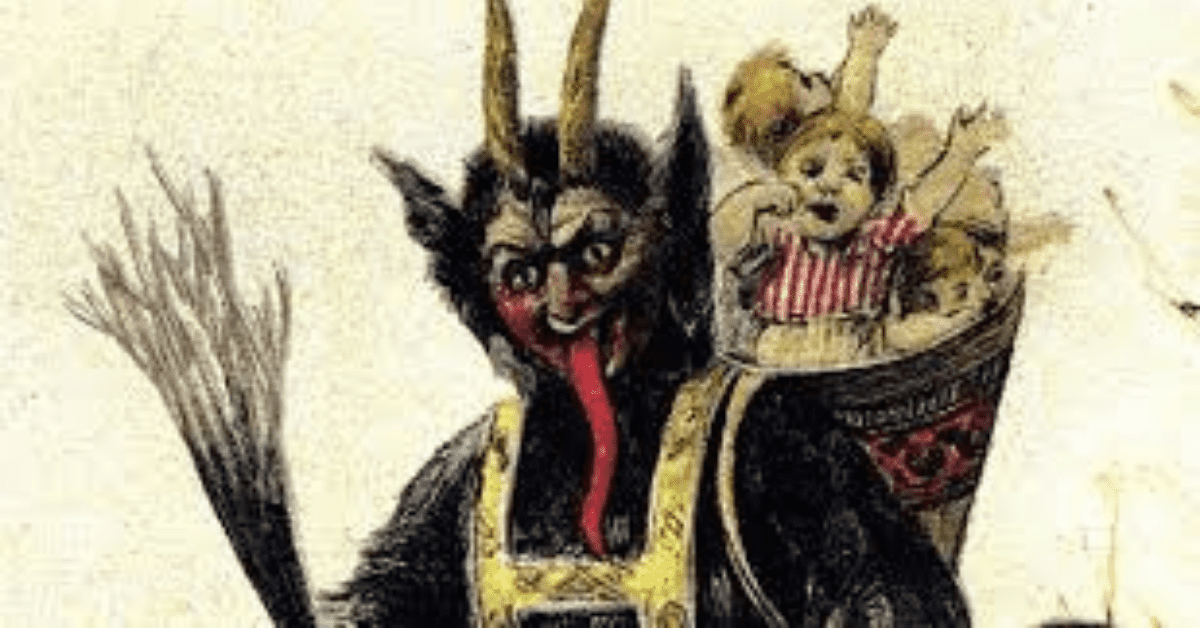 I’m sure most of you enjoy Christmas, in fact, it may be the one time where we forget about all of the negativity and darkness that surrounds us throughout the year. But, was it always this way?

For many people, long ago, it may have been the exact opposite, thanks to, the Krampus.

Unlike the happy, jolly character of Santa Claus, who goes around rewarding children for behaving with presents, the Krampus is the polar opposite. With an image that definitely does not provoke joy, he goes around punishing children who have been naughty.

From leaving coal in their stockings to beating them with sticks and branches, and even throwing them in his sack and bringing them back to his lair, he was a figure that parents would use to scare their children into behaving.

In fact, he was so feared, even adults began to chastise other adults who would dare mention his name, or dress up as him. This was most likely due to the fact that based on his appearance, he closely resembled the devil.

The fear and paranoia became so bad that at one point, during the Inquisition, Krampus was banned. No one was allowed to dress up as him or celebrate him. If so, they faced execution.

But that didn’t stop his legacy from spreading across the world, no matter how many times he was suppressed. Perhaps no one could keep him from doing what he was created to do. Punish.

Los Angeles, California, a location with one of the greatest celebrations held in honor of the Krampus, called a Krampuslauf.

Many people gather for live metal music, vendors, delicious German food, where Krampus originated from, and many performers dressed head to toe as the creature himself. This is something that is enjoyed by thousands that flock to the celebration.

Another part of the festival is something that is even recognized by the UNESCO World Heritage List. They put on a traditional eighteenth-century play that is directly based on the original Nikolausspiel, or Nicholas Play, that was put on in Central Europe centuries ago.

The performers even use old translated German scripts for the show, a tradition that has since died out in Austria.

With music, lights, and fun costumes, it’s easy for everyone to get caught up in the excitement of celebrating Krampus, but few are aware of just how dark his origins really are.

Origins of the Krampus

As mentioned earlier, the Krampus originated many centuries ago in Germany, as the name Krampus itself comes from the German word “krampen” which means claw.

Although there are many different possibilities as to his exact origin story, there is one specific example that can be pinpointed as the most common story.

The story itself dates all the way back to when paganism was very popular, and Norse mythology was rampant. It is said that Krampus was the son of Hel, who was commonly misconceived to be the Norse Goddess of Death.

However, that was only what her name meant.

In mythology, she was never actually recognized as a god, but merely the ruler of the underworld. This is because neither of her parents were gods, her father, a trickster named Loki, only ever achieved the status of demi-god.

When people described her, it was said that she was half flesh-colored, like a human, and the other half of her was blue. It was also a safe bet to say that you never wanted to cross her because she had a threatening, harsh, and extremely cruel personality.

Much like his mother, Krampus was not to be messed with. He was a symbol of evil, a punisher of naughty children, and some would say, the devil himself. Basically, he was the opposite of Saint Nicholas.

So why do we need him? Well, some say that he was a necessary evil, sort of like the yin to Saint Nick’s Yang.

In the twelfth century, due to the resemblance of the devil, the Catholic church tried to banish Krampus and his celebrations.

Then, centuries later, in 1934, Austria’s Conservative Christian Social Party actually succeeded in banning him in their country.

Another group that succeeded in their efforts to ban Krampus, actually existed during the same time period. The nazis banned Krampus, but for a different reason.

Due to his origins being rooted in paganism, that was an automatic red flag to their party, as anything outside of the norm was considered a threat.

Krampus is not the only dark tradition that surrounds Christmas. To start off, let’s look at Frau Perchta, a tradition from Austria and Bavaria.

She is a witch who comes to decipher which children have been naughty or nice. Instead of rewarding the good children, she slits the abdomens of naughty children and stuffs their corpses with straw.

Perhaps an even darker one is the story of Hans Trapp from France. He was a man who used witchcraft and made deals with the devil to become rich. After he was excommunicated from the Catholic church, he was an outcast and began roaming the countryside dressed as a scarecrow.

After years of living this way, he became obsessed with the idea of tasting human flesh. He kidnapped a shepherd boy and killed him by cooking him over a fire. However, before he could take a bite, God struck him with lightning, killing Hans.

According to the legend, he returns to France on Christmas and goes from door to door looking for a young child to devour.

Sadly, there is a large list of stories like these that prove Christmas is not as bright and happy as it always appears on the outside. None of them are quite as terrifying as Iceland’s story of the Yule Lads.

Imagine, 13 different creatures, each set out on Christmas eve to find children and terrify them in their own unique way. From stealing farm animals to removing all sources of light from a room to scare a child afraid of the dark, there was nothing these creepy creatures wouldn’t do.

But perhaps the worst part was their pet.

A ferocious cat, who liked to feed on, unsurprisingly, children. This beast is much worse than Krampus though, as it does not care who it eats.

While Krampus only takes children who have been naughty, the cat takes whoever it can sink its teeth into.

Like many things that lurk among us, they may appear bright and joyful, but they come from things so dark that our minds can never truly grasp them.

Christmas is a time of the year that is supposed to bring joy to all children, but for some, it’s a time of dread because they know what comes for them on Christmas Eve, instead of jolly old Saint Nick.

The Dark History Behind Bobby Mackey’s

Origins of the Men in Black Phenomenon