The Curse of the Bridgewater Triangle 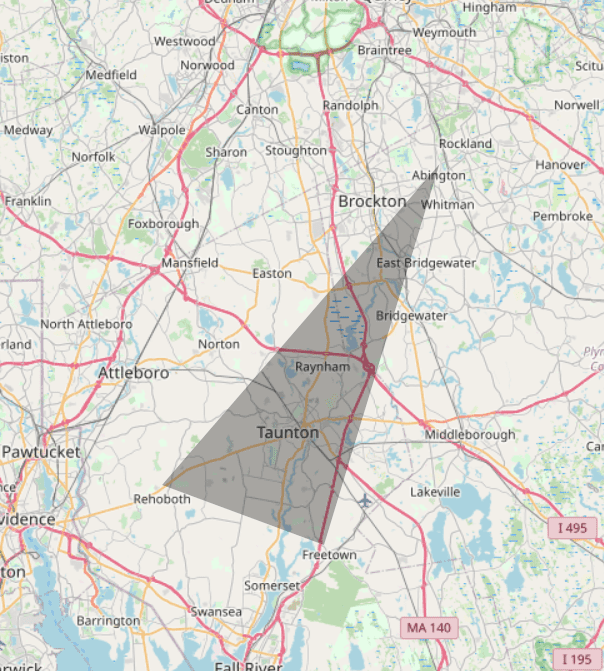 Chief Metacom, was the Chief of the Wampanoag Tribe. After the death of his father and older brother in 1662, Metacom was thrust into the responsibility of being chief of his tribe.

After the European colonists came to America and encroached into the indigenous territories, Metacom stepped aside and made multiple concessions to avoid violence breaking out between the two. Unfortunately, things took a hostile turn in 1675 and Metacom was forced to take action to prevent Puritan expansion.

He brought forth what is now called King Philip’s War, which was a losing battle to begin with since not even a year later, he found himself shot and killed in the Misery Swamp, on August 12, 1676. The shooter was a praying Indian named John Alderman, which means he was a native American that converted to Christianity.

After his death, his wife and nine-year-old son were both sold into slavery in Bermuda. Metacom’s body was cut into multiple pieces, his head was mounted onto a pike at the entrance to Plymouth, Massachusetts for over two decades, and the rest of his body was cut into quarters and hung from trees. But his right hand was severed and given to Alderman as a trophy for his kill.

Located in southeastern Massachusetts about 30 miles south of Boston, this area that covers about two-hundred square miles has seen more than its share of bloodshed and creepy sightings. In this article, we will delve into the haunted history that looms over this area.

From a long list of UFO sightings to supposed bigfoot encounters in the 1970s, I personally have no doubt that something is definitely amiss here. But what really caught my eye were two separate, and rather bloody, incidents that occurred.

Starting in the late 1990s, the police began to find a series dead cows. Not only were they dead, but they were also mutilated, some almost completely drained of blood. Due to this rather alarming phenomenon, the police suspected that they were used in some sort of ritualistic killings in the area.

When it comes to everything that has happened in this here, unfortunately this only skims the surface. In late December of 2014, on the outskirts of Ames Nowell Park which is on the border near Brockton and Abington, Massachusetts, the bodies of two women were discovered.

The cadavers were discovered on Sunday, December 28 by a young man walking his dog in the woods near his house. Needless to say, his morning was ruined when he stumbled upon a pile of severed body parts. In the local paper the man stated:

“I saw something pink. I thought maybe it was a dead animal because there’s a lot of poaching back here or maybe insulation because it was pink and a lot of people dump trash back here.”

The severed parts included a foot, calf, and part of an arm. The poor man was terrified because it seemed so recent, as he described for the reporters,

“When I saw it, I didn’t want to stay around here that long because there was no rot to it. It was all chopped up, you could see the limbs, how nice and neat they were cut…The guy that put it there put a fold-up chair on it and then put a bunch of wood on it so you can’t see it from the main path. All I know is I didn’t want to touch anything. I went in the house and told my sister and I dialed 911.”

Police later identified the body on top as 20-year-old Brockton local Ashley Mylett, who had disappeared four weeks prior to the discovery of the bodies.

The one on the bottom was identified as 51-year-old Linda Schufedt, who had been living in Quincy, a neighboring town, when she disappeared all the way in July of the previous year. Both women had a history of heroin abuse and disappearing for lengths at a time, which is why their families weren’t initially alarmed by their absence.

Their killer was never found, and their case remains unsolved to this day, not much was ever even inferred about possible suspects.

A place for the mentally ill, it began housing patients in 1854. Some of its more famous residents included Anthony Santo and Honora Toppan.

An Italian-American man, Anthony Santo was taken in because he started having hallucinations after his brain was damaged from a severe case of scarlet fever. He was forcefully admitted since his hallucinations had caused him to murder two of his cousins and a six-year-old girl by luring them into the woods, killing them with a knife, and stoning the little girl.

As bad as he was, what was almost worse were the crimes committed by someone who took an oath to do no harm, but apparently it meant very little to her. Honora Toppan, also known as Jolly Jane, was a nurse that worked at Taunton.

She wasn’t much of a nurse though, if you ask me. She would conduct painful experiments on her patients, killed her landlord, and even 4 elderly members of a family she worked for. Once she was finally arrested in 1901, she confessed to at least 31 different murders.

She wasn’t the only one who wronged her patients. Reports of many other doctors and nurses torturing the residents quickly spread after the place was shut down. The barbaric so-called treatments that they used on the patients included submerging them in water, keeping them out in the cold for long periods of time, electroshock therapy, and prefrontal lobotomies.

It’s no surprise with the gruesome events that the abandoned hospital has now become one of the most haunted locations in the Bridgewater Triangle. In the Goss building, the ghost of a man in white is known to appear on the third floor, and people report seeing the spirit of an elderly man walking on the grass of the grounds.

From the woods during the night, people can hear banging, screams and moans from inside the building, or see hazes, shadows, and shapes of people inside the buildings. To top it all off, patients and staff tell stories of cult activity from strange markings in the basement to suicides being made in the name of the devil.

If you want to see for yourself whether or not these people are lying, the grounds for the Taunton State Hospital in downtown Taunton can still be visited today.

Remember when we mentioned UFO sightings earlier, well the list is surprisingly long for one area. Normally when people imagine UFO sightings, this isn’t the first place they think of. But it should be.

Starting all the way back before everyone knew what UFOs were, the first sighting was reported in both Roxbury and Bridgewater by multiple different people in 1760. Fast-forward a couple centuries to July 3, 1972. At least 26 people confirmed to have seen a triangular object in the sky near South Shore.

Fast-forward again to 2011, police received 21 separate reports of people seeing a sphere of fire in the night sky. Just what were they seeing? What was anyone seeing? And these aren’t the only strange sightings that people have reported in the Bridgewater Triangle.

In 1970, two different police officers said they encountered a large creature in the woods, and the creature very much resembled bigfoot. In 1971, another police officer claims to have seen a thunderbird.

A thunderbird is a mythological creature from North American indigenous peoples’ culture. It was considered one of the most powerful beings. This was because it could create thunder by flapping its wings and lightening by flashing its eyes.

Native American culture plays a big part in the Bridgewater triangle. Take the Dighton Rock for example. Sitting in Berkley and weighing nearly 40 tons. It was originally located in the riverbed of the Taunton River before it was moved in 1963 to a nearby museum to preserve it while they were constructing a dam.

What made it fascinating were the strange carvings of different drawings, symbols, and writing. Historians identified them as petroglyphs, which are stone carvings that are made by pecking on the rock’s surface with a stone chisel and hammerstone.

However, other than the fact that it was carved in around 1680, historians are pretty much unsure of its origin or meaning. No one has been able to decipher the language or culture the markings came from, but some do propose that it could either be from native Americans or Phoenicians.

The good news about this though, is that if you want to visit it then you’re in luck, as it is still open to the public today.