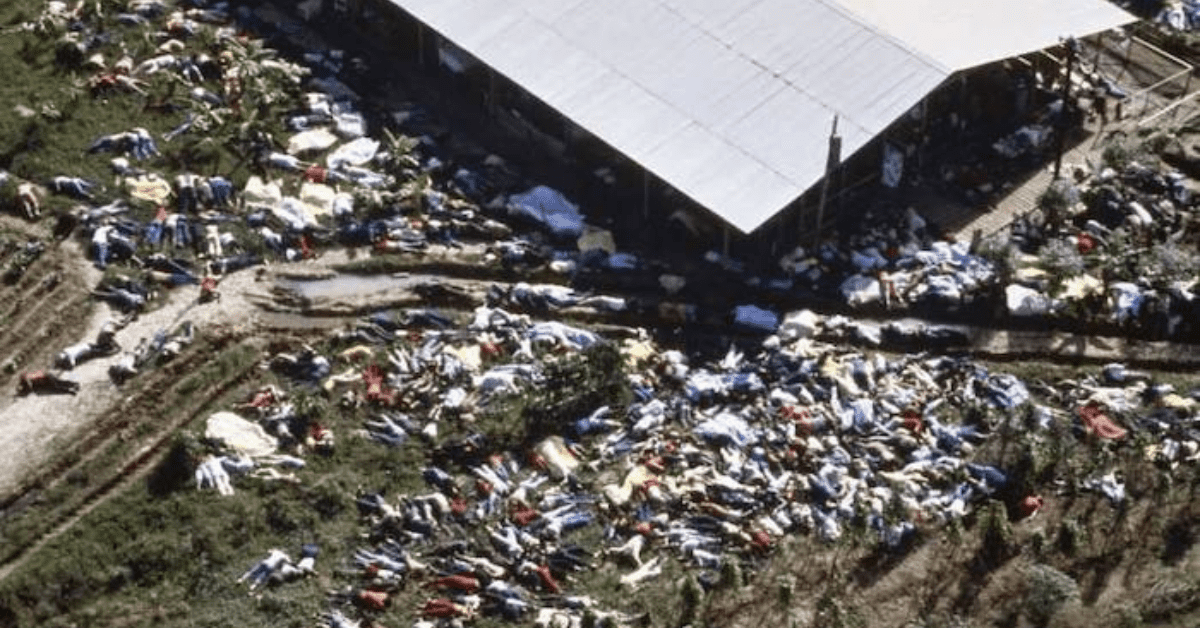 This article contains death and suicide-related material that might be sensitive to some audiences. Reader discretion is advised.

In August of 1977, James Warren Jones, or more commonly known as Jim Jones, moved himself and several hundred of his followers to an agricultural commune in Guyana, a former British colony located in South America, near Venezuela and Brazil.

Over the previous months, Jones had sent a few of his male followers to the land he had purchased, in order to clear away trees and build living spaces.

By the time he arrived with everyone else, there were 60 cottages, large kitchens and food storage areas, laundry rooms, an infirmary, two schoolhouses, and an open-air pavilion they would use for meetings and Jones’ preaching.

With over nine hundred people living there, they formed what was called The Peoples Temple Agricultural Project, or now known as Jonestown. This was part of The Peoples Temple, a church Jim Jones created and preached at in San Francisco.

Back in America, the group was actively involved in many different humanitarian causes in their community. They were made up of people of all races since Jones was very outspoken about how segregation needed to end and the immorality of racism.

Therefore, his followers were very active in diverse and low-income communities, given that they didn’t believe in capitalism.

Once everyone was settled in Guyana, many people assumed that the community was living peacefully and aiding other people that needed help. Only, peaceful is not the word I would use to describe their way of life.

The public started to become suspicious of Jonestown only when defectors that had managed to leave and make their way back to America told their stories to the press. Among them were Deborah Layton, and a couple, Tim and Grace Stoen.

At first, they described how members of the settlement were often beaten, humiliated, and blackmailed into signing their possessions away, even before they moved to Guyana.

Jones had even managed to brainwash many of them into thinking that minorities were being imprisoned in concentration camps back in America.

As if that wasn’t bad enough, they then went on to describe how the commune was run like an armed work camp, and Jones was constantly threatening mass suicide, or in his words “a revolutionary suicide” .

With the thought of their loved ones possibly being beaten and held against their will, American citizens formed a group called the Concerned Relatives. They were lobbying American authorities to investigate both The Peoples Temple and Jonestown so they could communicate directly with their loved ones.

Due to the constant pressure from the public, on November 7, 1978, United States Representative Leo Ryan announced that he would form a congressional delegation to investigate stories and claims about Jonestown.

It was then decided that someone from the government needed to see the compound in person. So later that month, Congressman Ryan traveled to Guyana in order to inspect the compound and meet with the residents. He wanted to determine if they were truly being held against their will or not.

Before he was set to leave Jonestown, some members were able to attack him. Fortunately, he was able to leave on a truck while still unharmed, and a few members boarded the truck with him, claiming that they wanted to leave Jonestown.

Unknown to Ryan, other residents had followed him on his way back to the airstrip so he could leave for America, and share the truth. But before he could board the plane, he was attacked and killed.

Who was Jim Jones?

Born on May 13, 1931, in Crete, Indiana, Jones described his childhood as being treated like the trash of the neighborhood.

His parents were James Thurman Jones, a World War 1 veteran, and Lynetta Putnam. His father was an alcoholic, but also a mystic fortune teller.

He identified as an underdog. According to Jones, he would constantly fight off bullies, rescue stray animals, and take home beggars from the streets. Jones was heavily influenced by Karl Marx, Adolf Hitler, Joseph Stalin, and Mahatma Gandhi, and soon became interested in religion and the effect it had on people.

Despite him being very intolerant of racism in America, people described him as a very weird kid. Apparently, he would hold funerals for small animals and he even stabbed a cat to death once.

After his parents’ divorce, he spent the rest of his childhood with his mother in Richmond, Virginia, and then grew up to marry a nurse that was four years older than him in 1949.

Together, they had five children. One of which was their own, and four of which they adopted. Two of Asian descent, one of Native American descent, and another child that was African American.

In the mid-1950s, Jones opened his first church in Indianapolis and during this time he had no affiliation with a religious denomination. Due to his beliefs and family appearance, a majority of his congregation was made up of African Americans.

In 1960 it was then called the Peoples Temple, and it became affiliated with the Disciples of Christ. Four years later, Jones was ordained by that church.

During the mid-1960s, Jones, his family, and about one hundred of his followers moved to a town in California called Ukiah due to fear of a nuclear holocaust.

By the time 1972 rolled around, Jones was holding services in San Francisco and Los Angeles. At this time no one was suspicious of him, in fact, he was loved and respected by politicians, the press, and the public.

Not only was it due to his charismatic personality, he also claimed to read minds and heal people. It was paradise for Jones, an adoring public and obedient following, everything seemed perfect.

But in 1977, the press had started to ask questions about his operation and how it was being financially supported. Fearful that he would be exposed, he moved his family and around 900 followers to Jonestown in Guyana, which he had been planning for years.

Life in Jonestown and the Massacre

Six days a week, every healthy resident had to perform manual labor. But if they were in pain then they were out of luck because Jones confiscated all medication from residents, but kept himself habitually medicated on amphetamines and barbiturates.

He would consistently conduct public punishments and humiliation, and sexual advances in private. This was especially easy for him because as the leader he declared that all men, except for himself, were naturally homosexuals.

Families were torn apart and he encouraged everyone to inform on one another, essentially breaking any sense of trust the followers had in each other.

As the sun went down, the moon came out and what was known as “White Nights” took place in the main pavilion. Everyone would meet as a group while Jones preached about government conspirators in America, the media, and how their relatives in America wanted to destroy the community that they had built.

According to defectors and relatives, Jones would control all information that entered and left the camp. Letters were censored and phone calls were restricted or even scripted, according to relatives that claim they heard Jones telling their loved ones what to say on the phone.

When it came to the news, it was whatever Jones said it was. Some of the things he told his followers include the KKK marching through the streets of America, concentration camps being created for African Americans and political dissidents, and even nuclear war on the verge of occurrence.

Jones even controlled who came and left the compound, with armed guards surrounding Jonestown 24/7.

Jones always knew that one day everything would fall apart and the compound would be put at risk. Thus came his loyalty tests, where he had his followers practice revolutionary suicide.

To do this, he would have them all drink a fruit-flavored drink, similar to Kool-Aid, that he said was laced with poison. Once everyone drank it and realized that they were still alive, he would tell them they had passed yet another loyalty test.

Even with everything they had endured, no one could have known what was going to happen next.  After the shooting of US Congressman Leo Ryan and others at the airstrip, Jones sprung into action.

He proceeded to release radio orders to everyone that wasn’t currently in the compound to commit suicide as they had practiced.

Back at the compound, he then enacted his plan for revolutionary suicide. The adults were given a fruit-flavored drink that was laced with cyanide, tranquilizers, and sedatives.

Those who refused to comply were forcefully injected with it, and those that tried to run were shot to death.

Others were put in charge of using syringes to squirt it into the mouths of infants and children before they drank the poison themselves.

Jones himself was later found with a self-inflicted gunshot wound to his head.

November 18, 1978, went down as one of the most tragic days in American history. With over nine hundred American civilians dying at once, this marked the greatest civilian casualty in America’s history before 9/11.

Once news of this tragedy reached people, everyone was devastated. Especially the families, who were also angry with what was allowed to happen to their loved ones.

The government tried to have the bodies buried in Guyana, but the Guyanese government refused to allow it.

On top of that, the surviving family members wanted their bodies to be brought back so they could hold proper burial services and have a chance to say goodbye.

Due to this, the government was forced to have the military complete a recovery of the bodies. The death toll was so large, so brutal, that many veterans from this time still suffer from post-traumatic stress disorder due to this event.

Just imagine it. Bodies laying on the ground, practically on top of each other, for miles. Even children, over 300 of them.

If you would like a more vivid description, you can always look up the Jonestown massacre for yourself, as it is too disturbing for this website. Look at your own discretion.

They were all able to be brought back home for a proper burial, but their families will never receive justice. Every family has a story to tell, and some are more tragic than others.

To learn more about specific families that were involved in this tragedy, check out the link below. It contains more information and links where you can read their stories firsthand for yourself.

Ever since the tragedy that unfolded in Jonestown, the area in Guyana has remained uninhabited, a ghost town now overgrown by the surrounding jungle.

May the Jonestown massacre victims rest in peace, and the family and friends take solace in the fact that they will never be forgotten.