The Tragedy of the Burari Deaths 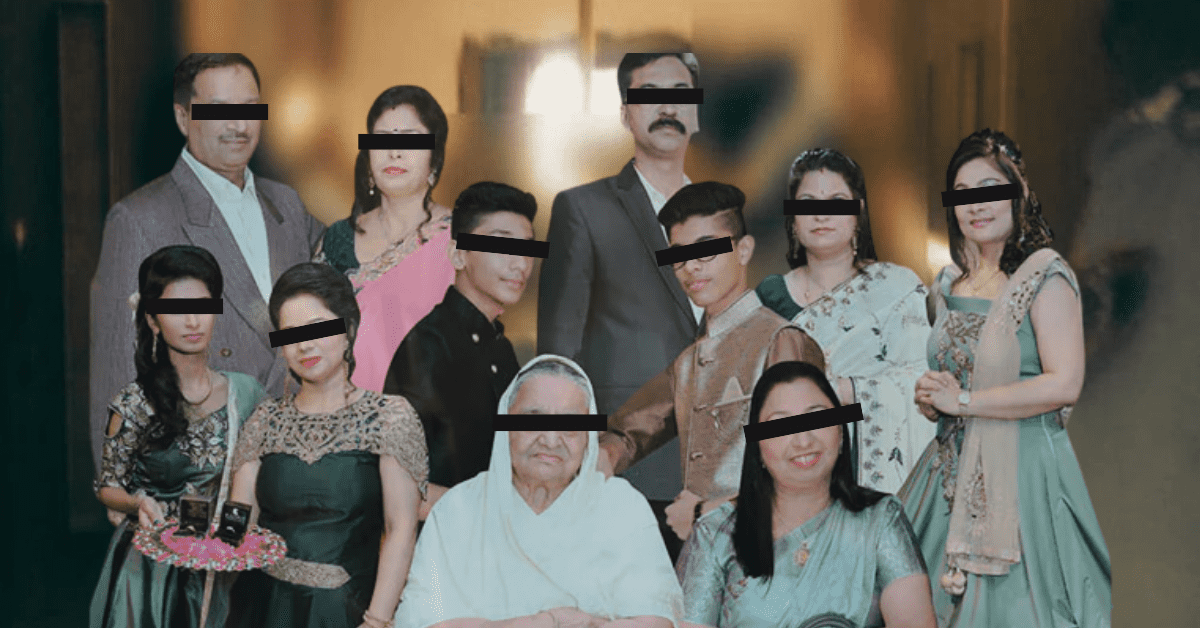 At 7am on July 1, 2018, the eleven bodies of the Chumbawat family were discovered by a man named Gurcharan Singh. He was a neighbor to the family, and usually enjoyed an early morning walk with one of the family members. Only no one showed up this morning, and their family shop was already a couple hours late in opening.

When he returned home, he noticed that his neighbor’s door was wide open. Confused, he slowly started to enter the house, and confusion soon turned to fear. . Inside the house, he came across a scene that looked like the hanging roots of a banyan tree descended from the ceiling of the house, only they weren’t roots.

He fled and called the police when he realized that what he saw were not tree roots at all, but bodies, blindfolded, wrists and feet bound, hanging one by one next to each other, adding up to a total of ten people.

Another body was later discovered sprawled out on the floor of another room. What happened to these people? How do this many people die in broad daylight? The death of these eleven people, an entire family spread out over generations, shook the district of Burari, in the city of Delhi, India. What was once a quiet peaceful town, was now the sight of one of the world’s deadliest mysteries.

Sometimes referred to as the Bhatia family, they were a seemingly normal middle-class family. There were eleven of them living in their house together, which may seem crowded to some people.

But this custom is actually very common there, for entire families to live together under one roof, even cousins and grandparents. Their culture highly values family and practicality, so the Chundawats were definitely considered a normal family in their community.

They would enjoy many different types of food together, and the head of the household, Lalit, would regularly enjoy a drink with his friends.

However, their seemingly perfect life was shattered when the family patriarch, Bhopal Singh died in 2007 from natural causes. After Bhopal’s death, there were some major changes in the Chundawat family.

First, they became vegetarians, and Lalit stopped drinking. They believed that cleansing their diets would help them become pure and ensure their chances of a good afterlife. However, the son and new family patriarch, Lalit, started to go down a very dangerous path.

The Death of the Family

When the bodies of the Chundawat family were discovered, ten of them were found hanging from their ceiling all in a row next to each other. They had their hands tied behind their backs, their feet tied together, and their mouths taped shut.

Under their feet, there were five stools on the floor. This means that there had to have been two people sharing each stool when they went through with hanging themselves.

Unfortunately, two of the members that hung themselves were only teenagers, with the youngest being thirteen years old. They were described like the hanging branches of a banyan tree, which is something that is held sacred in their culture.

The oldest member of the family, Narayani Devi, who was eighty years old at the time, was noticeably absent from the trail of bodies. When the house was searched, they found her body laying down on the bed in a neighboring room. Based on the coroner’s report, she had died from a lack of oxygen.

You would think that she may have died from natural causes based on her age, but her body said otherwise.

There was bruising on her neck, leading authorities to believe that she had been strangled to death. But who could find it in their heart to take the life of an innocent woman?

Even authorities were shocked by the scene, that the very first police officer that arrived when called by the neighbor, had this to say:

“It was shocking. I stayed only for 10-15 seconds before rushing downstairs to call my seniors. At the time I did not see whose hands were tied and whose eyes were covered. I just saw a lot of bodies hanging, just like branches of a tree”.

What happened to the Chundawats, shocked their community, as many people could not believe that they would commit the ultimate sin and end their own lives, and other people thought that foul play was involved.

Slowly, because of all the questions about what really happened and the graphic details of the case, it slowly started to spread across the country, and then across the world.

Much like the Burari case, this is not the first time that the media has run stories like this. For example, 1978 People’s Temple Mass-Suicide was fueled by a religious cult and resulted in the death of nearly 900 innocent people. Unfortunately, this list could go on for a while, which is honestly quite scary.

One of the reasons it can be quite scary is because it shows the unnerving influence that a person could have over others, and it shines a bright light on mental health. If this was addressed in the Chundawat family, then perhaps they may not have met their tragic demise.

As mentioned earlier, the family was shaken in 2007 when their patriarch died, but no one else took it harder than his son, Lalit.

Not only was he thrown into the position of patriarch, which can be a lot on someone’s shoulders, but he had also been struggling with his mental health even before his father’s death.

Not only did he suffer a major head injury from an accident years prior, but he was also the victim of a violent crime. Someone had attempted to murder him and it ultimately ended up in him losing his voice.

Lalit began to feel that he was losing control of his own life. So after his father’s death, he started to claim that the spirit of his father was possessing his body, and was giving him instructions on how he and his family should live in order to prosper.

This never rose to the surface until the investigators found eleven different diaries, all written by Lalit, over the span of years, ever since Bhopal died.

In these diaries, the police read some disturbing things. Throughout them, Lalit would describe rituals that his father’s spirit supposedly was telling him and his family to perform in order for them to lead a prosperous life.

However, the worst part comes in the last diary where he describes the deaths of him and his family. It was a ritual that they were planning to do in order to give thanks to the father’s spirit for their good luck, but he really believed that they would all be able to live through the ritual, as he wrote about how they would help untie each other after they completed it.

He even wrote that his mother was too old, so she would be “made to sleep” in the other room. Overall, the diaries were a great glimpse into the mind of Lalit, which ended up helping investigators determine what happened to the family.

Once the diaries were found, theories started to spread. Especially ones that revolved around Lalit, as he was the main subject of the diaries.

One of the most twisted theories out there is the one that Lalit maliciously killed his entire family as a way to take them out when ending his own life.

Some believe that he pretended to have lost his voice, and was silently planning their deaths for years, as a way to relieve himself of being the family patriarch. According to this theory, he would have been the one to strangle his mother and cause everyone else to go along with his plan.

Another popular theory is that the entire family was murdered by an outsider. This theory emerged once people discovered that the family’s wrists and feet were bound, they were blindfolded and gagged.

The house was also unlocked with the door wide open and there were no suicide notes found anywhere. However, this theory was quickly debunked for several reasons.

The first one was that the family dog had not barked at all, but the most important one was the fact that the CCTV footage showed no one entering the home the entire night or early the next morning. The only ones on camera were a few family members seen carrying stools and wire.

Throughout the entire house, the investigators saw signs of a ritualistic practice that the family may have been trying to complete when they died. There were eleven pipes protruding from the walls inside the house, the exact number of people that died.

After investigating, no one was able to come up with a definite answer about the Chundawat family, but they are positive that whatever happened, they did it to themselves, nor murderers or ghosts. The fact is, the family was left alone with their own minds.

Perhaps the most logical explanation about what happened to this family lies inside the human mind. Lalit clearly had mental health issues that he never dealt with, and once his father died, they spun completely out of control which resulted in psychosis, because he believed that he was hearing his father’s spirit and he had possessed his body.

In order for the family to have gone through with Lalit’s plan, they could have all been suffering from mass psychosis because Lalit was an influential and powerful person in all of their lives. Once the family coincidentally started prospering after the father’s death, they all attributed to Lalit’s delusions.

Now, the house is currently being inhabited by another family, who claim that the previous owners never really left. The only surviving member of the Chundawat family, Lalit’s brother, Dinesh Singh, still pleads with officials to continue to look into what happened to his family.

He does not believe that they would practice rituals that Lalit described in his diary. Honestly, he may not have known them as well as he thinks, since he wasn’t living with the family for a while, which is why he is the only surviving family member.

Death has a way of changing people, and for this family, it ultimately ended up leading to their own demise. Is the scariest part about this case the fact that we may never get a real and definite answer about what happened to the family, or why they did what they did?

Perhaps. Or maybe, it’s that what happened to them forces us to face the fact that the human mind is possibly the scariest part of being human. May the community of Burari and the surviving family find peace after this tragic event.

The Dark History Behind Bobby Mackey’s